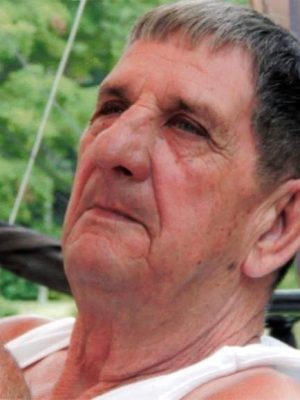 Family and friends may call the Amos Carvelli Funeral Home, 201 Edison Street, Nutter Fort, WV, from 4:00 to 8:00 p.m. Thursday, July 7, 2022. The funeral service will be held on Friday, July 8, 2022 at 1:00 p.m. at Amos Carvelli with Pastor Ron Owens presiding. He will lie in state for 1 hour prior to the service. Interment will follow in the Stonewall Park Cemetery, Stonewood, WV.

James “Jim” “Big Chief” Lawrence Merritt Sr., 82, of Stonewood, while surrounded
by his loved ones, went home to meet his Heavenly Father and be rejoined with his wife Barbara
on Monday, July 4, 2022 after a painful and courageous battle with lung cancer.

He married the love of his life Barbara Ellen Carle on June 6, 1964 at Mt. Lake Park in Garrett
County, Maryland. They spent 49 loving years together when she passed away April 9, 2013.
There wasn’t a day that went by Jim didn’t long to see his Barbara again.

Jim is also survived by his doting sisters and brothers-in-law Myrtle and Earl Reed of Moatsville,
WV, and Rose and Jack Thebo of Traverse City, Michigan. Sister-in-laws Dorothy Carpenter of
Nutter Fort, WV and Patty Kalleel of Clayton, NC and brother-in-law Tom Modesitt of Walker,
WV. A special niece and nephew Sharon Righman and Charles “Chuck” Reed. A special cousin
Raymond Cain and wife Donna. His granddog Huckleberry that was always near and eager to
clean up his crumbs he dropped. Jim is also survived by many nieces, nephews, step
grandchildren, and many friends that were as close as family.

In addition to his wife, parents and grandparents, Jim was preceded in death by his sister Edna
Marie Cain.

Jim worked ever since he could walk starting with working on the farm, cutting timber, parking
cars, and in oil and gas. Jim found his lifelong career in the West Virginia coal mine industry. He
started out as a coal miner, then as an electrician in the coal mines before he found his passion
and love as a coal truck driver. He worked for various companies before spending most of his
tenure at Raymond Liberati Trucking Company for 29 years. It was in the trucking industry he
became affectionately and notoriously known as “Big Chief” on the CB Radio. Jim was a loyal
and loved employee with only taking a few sick days due to heart attack and surgery in his entire
career. Jim believed if you didn’t work 16 hour days you weren’t working. He was a highly
sought after truck driver for his perfect driving record, knowledge, his well-known dedication
and work ethic. He ended his 50 year career in the coal industry when he retired from Roblee
Coal Company with 15 years of service in 2008. Jim also enjoyed fixing and rewiring
electronics. People from all over would bring CB radios, CB mics, scanners and an array of
broken electronics for him to fix. He had a true knack for fixing anything electronic and was
fascinated on how things worked.

Jim was always known as a jokester and a hustler as well as a man that always seen the best in
people even when others didn’t. He was easy to talk to and was always ready to shoot the breeze
at the table while smoking out his window watching the neighborhood. You couldn’t help but
love his easy going personality and his view of the world. He could stack a deck like a true
outlaw and loved watching westerns. He hated wastefulness and truly enjoyed the simple things
out of life. He was extremely dedicated to his family and friends and could always be counted
on. Jim truly took care of the ones he loved. He enjoyed watching his grandchildren grow up and
lovingly teasing them. Jim was a member of The First Baptist Church of Nutter Fort. Jim will
undoubtedly be missed by many.

The family would like to thank Amedisys for the help in his care and his wonderful nurse Maria
Renzelli.

Jim handled his diagnosis with courage and lived each of his last days in great spirits, never once
complaining or feeling sorry for the cards that he was dealt. His response was simply, “The Lord
knows what he is doing.”

Courage is being scared to death but saddling up anyways. – John Wayne

Jim always found sending plants or flowers as a waste of money. If you feel compelled to do
something please just make a donation to your local church, parish or your favorite charity.

Family and friends may call the Amos Carvelli Funeral Home, 201 Edison Street, Nutter Fort,
WV, from 4:00 to 8:00 p.m. Thursday, July 7, 2022. The funeral service will be held on Friday, July 8,
2022 at 1:00 p.m. at Amos Carvelli with Pastor Ron Owens presiding. He will lie in state for 1 hour prior to the service. Interment will follow in the Stonewall Park Cemetery, Stonewood, WV.