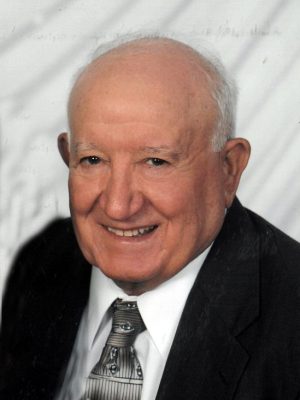 Family and friends may call at the Amos Carvelli Funeral Home, 201 Edison Street, Nutter Fort on Friday from 3:00 to 8:00 pm, where funeral services will be held on Saturday, January 15, 2022 at 10:30 am with Pastor Jerome Lewis officiating.  Entombment will be in the Floral Hills Memorial Gardens with Father Casey Mahone presiding and where full military graveside rite will be accorded.

John Lewis “Johnny” Oliverio, 97, passed away on Tuesday, January 4, 2022 in the Louis A. Johnson VA Medical Center.  Mr. Oliverio was formerly of the Park View section of Clarksburg and resided the last several years in Stonewood with his daughters, Patty (Joe) Messe and Theresa (Danny) Westfall.

He was born to in Clarksburg to Italian immigrants on July 12, 1924, the son and one of 11 children of the late Antonio (Tony) and Theresa (Daisy) Oliverio of San Giovani in Fiore, Italy.

He was preceded in death by his wife of 71 years, Amelia “Mildred” Drumpus Oliverio on January 8, 2015.  Johnny and Mildred were married on October 28, 1943 at St. Peters Catholic Church in Oakland, MD with Father Francis G. Drescoll officiating.  Together they raised five children; Theresa (Danny) Westfall and Patricia (Joe) Messe, both of Stonewood, Carol (Rick) Rapking of Madisonville, TN, John (Bonnie) Oliverio of Ocean City, MD and David (Brenda Thompson) Oliverio of Charleston.

He also leaves behind many nieces and nephews too numerous to mention, along with his extended family of the Drumpus and Gallo families, as well as a special friend, nephew and side kick, George Hill.

Mr. Oliverio was a United States Army veteran and a retired diesel Mechanic having worked for Simpson Truck Sales and later retired from Cook Motor Lines.

He was a very hard-working man from his young early life.  While mom took care of all the kids, cooked, raised a huge garden, canned and helped others, along with tending to the to the kids’ extra curricular activities, etc., dad was busy working continually.  He worked tirelessly for his employers and for friends and family.

He was the kindest, most gentle man we believe we ever knew, a wonderful loving father and grandparent. He loved his family, especially his grandchildren, more than life itself.  They were his shining stars and he was happiest when they were all crawling over him and picking at the few hairs on top of his bald head.

He loved his siblings and would often tell stories of how they grew up and the love he received from them, especially his sisters who spoiled him until mom took over that job, and she did it well.  Patty and I can attest to that because we later inherited that job of spoiling him according to our husbands.  He was easy to spoil.  We are missing him terribly but at 97 it was to be.  He was tired and ready to go home.  Together with Pastor Lewis he gave himself to the Lord early this summer.

The family would like to thank Amedisys Hospice for all their help and compassion during dad’s last few months.  There are so many to thank, but we would like to recognize Debra Bennett and Jill Heffinger who gave dad exceptional care.  He always looked forward to their visits. ; Nurses Maria Renzelli and Stacey Putzulee who were always on top of things and gave him the best care ever; Amy Wilson for that extra time given to dad in conversations to make him laugh; and Pastor Jerome Lewis who visited dad every two weeks.  He became dad’s friend and he always looked forward to his visit.  Although dad couldn’t sing a lick, he always enjoyed listening to the Gaithers, especially on Saturday nights with mom.  Pastor Lewis always sang a few of dad’s favorites until he could see dad getting sleepy.  Thank you Pastor Lewis.

The family would also like to thank Dr. George Shehl, who has taken care of our father for many years and has gone above and beyond his duties to give dad that special caring help that he needed and being so helpful and compassionate to Theresa and Patty.  He was always there.  Not only dad’s doctor but our friends.  Thank you Dr. Chris Rivera and Dr. Ashley Secret.  We thank you for all your help, caring and advise.

Family and friends may call at the Amos Carvelli Funeral Home, 201 Edison Street, Nutter Fort on Friday from 3:00 to 8:00 pm, where funeral services will be held on Saturday, January 15, 2022 at 10:30 am with Pastor Jerome Lewis officiating.  Entombment will be in the Floral Hills Memorial Gardens with Father Casey Mahone presiding and where full military graveside rite will be accorded.