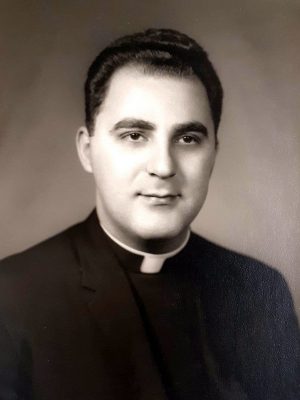 Honoring Father Wash’s wishes, he will be cremated.  A private inurnment will be held at Holy Cross Cemetery. A Memorial Mass will be announced at a later date.

He was born in Clarksburg, WV, on January 17, 1941, a son of the late Joseph and Thelma Persico Barbina Wash.

He was a graduate of Notre Dame High School, and attended St. Mary’s Seminary in Baltimore, MD, and was ordained to the Catholic priesthood on May 18, 1968, at St. Joseph’s Cathedral in Wheeling.  He attended West Virginia University and obtained his master’s degree in Counseling from Marshall University.  He was a licensed professional counselor and advanced alcohol and drug addiction counselor for over 15 years.  He worked at the United Summit Center as an addiction therapist and continued his ministry to the priesthood during that time.  He retired from counseling and the ministry from the Wheeling Charleston Diocese at the age of 73 and continued to fill in as a supply pastor when needed.

Father Pat was a member of the St. James Catholic Church in Clarksburg and was a 3rd Degree Knight of Columbus, Fairmont Chapter. He held memberships with the Association of Counselors in WV and the WV Drug and Alcohol Association.

Father Wash is survived by his brother Julian Wash and wife Vera of North View and sister, Carolyn Griffith of North View, as well as several nieces and nephews.

In addition to his parents, he was preceded in death by two sisters Anna Marie Yeager and Sarah Skoch.

Honoring Father Wash’s wishes, he will be cremated.  A private inurnment will be held at Holy Cross Cemetery.

A Memorial Mass will be announced at a later date.