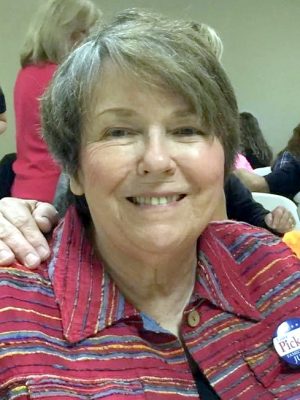 A gathering of family and friends will be held on Tuesday, November 30, 2021, from 9:00 – 10:00 am at the Immaculate Conception Catholic Church, 126 E Pike St, Clarksburg, where a Mass of Christian Burial will commence at 10:00 am with Father Casey Mahone as celebrant.

Sandy Trzcinski passed away on Tuesday, November 16, 2021. She was born in Canonsburg, PA on January 19, 1942 and was named Alexandra by her parents Al and Grace Trzcinski.

In 1955, her family moved to Clarksburg. She attended Notre Dame High School and Saint Mary’s School of Nursing after which she began her Nursing career. She later studied at Duquesne University where she was awarded a BSN.

Sandy moved to Michigan where she practiced Nursing for 13 years at the Macomb County Health Department. She returned to WV and lived in Morgantown as she studied at WVU, earing her MS in 1986.

Sandy was well traveled in her lifetime. She spent a summer as a volunteer nurse in Jalapa, Guatemala, C.A., worked as a nurse on an Indian reservation in Nevada. She loved Latin America and visited Puerto Rico, Mexico, and various other locations.

Sandy was a devout Catholic all her life and was a member of the Immaculate Conception Catholic Church in Clarksburg.

Sandy is the last surviving member of her immediate family, having been preceded in death by her parents and her sister, Grace Trzcinski Washburn.

Surviving are three nephews, Robin Washburn and his wife Lisa of NV, David Washburn of NV, and Todd Washburn and his wife Polly of Morgantown, as well as eight great nieces and great nephews, Grace, Sonny, Lorenzo, Kelley, Alex, Christina and Alexandra; and one cousin, Mary Ann Benthall. She is also preceded in death by her canine companion, Zoie, who provided her many years of joy and friendship.

Sandy loved chianti and politics. She had the honor of assisting with the Gerald Ford campaign when she lived in Michigan and would often pick a favorite candidate to help them to victory.

After her retirement Sandy had been self employed as a Licensed Realtor. She loved the market and had great fun being a realtor and finding the perfect home for her clients.

In keeping with her wishes, Sandy will be cremated.

A gathering of family and friends will be held on Tuesday, November 30, 2021, from 9:00 – 10:00 am at the Immaculate Conception Catholic Church, 126 E Pike St, Clarksburg, where a Mass of Christian Burial will commence at 10:00 am with Father Casey Mahone as celebrant.