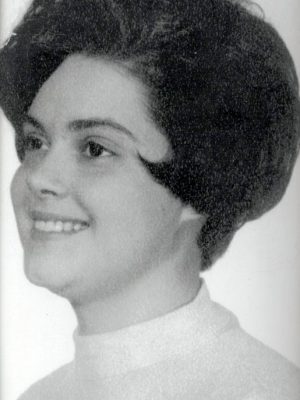 In keeping with her wishes, Mrs. Riley was cremated. A memorial service will be scheduled at a later date.

Deborah Frances Riley left this earth to join her heavenly father on Thursday, January 14, 2021. A celebration of life and memorial event will be announced at a later date.

Deborah was an adored and respected mother, wife, and noni. She grew up in the Glen Elk neighborhood of Clarksburg, West Virginia. She was a graduate of Notre Dame High School and was a long-time resident of Bridgeport, WV.

She was devoted to her faith and attended All Saints Catholic Church and Immaculate Conception Catholic church. She was proud of her Italian Heritage and was an enthusiastic attendee of the WV Italian Heritage festival. She enjoyed traveling with her husband, music, dancing and never went anywhere without her signature visor. She was one of the most talented unpublished authors of children stories that she saved just for her grandchildren that included stories like “Oxy the Fox” and “Katrina and Julianna.” She was a lifelong Green Bay packer fan. She enjoyed all holidays and was the life of every celebration. Deborah had a fun spirit that was contagious to all of those around her. She was a compassionate, empathetic, charitable, and caring soul who loved her community, and her legacy will be the love that she gave to others. Her door was always open and you were generally greeted with food, a hug or the traditional Italian cheek pinch. Her homemade meatballs, sauce and spaghetti every Sunday was legendary. Her most cherished role was being a wife, mother, and noni.

She was always willing to listen or offer advice and left us with so many words of wisdom: God loves us, just pray for them, believe in guardian angels, family always comes first, take your vitamins, wear crazy socks, kill ‘em with kindness, to cure cussing use Irish Spring soap, and most importantly, if something hurts, spray some Windex on it.

Deborah will be joining her father and mother, Orlando and Marion Mancino, her brothers Joseph Mancino, Thomas Mancino and Benjamin Mancino who were awaiting her arrival in heaven.

She was a loving wife to her husband Arthur Wayne Riley. She was a caring sister to Catherine Raikes and husband Gary Raikes. She was a devoted mother to her six children, Deborah Armstrong, Mary Riley and husband Jeff Killen, Christina Johnson and husband Steve Johnson, Arthur Wayne Riley Jr., Ben Riley and wife Kim Riley, and John Riley and wife Jessica Riley. She was a cherished Noni to her grandchildren, Danielle Shaffer, and husband Eric Shaffer, Desiree Poling and husband Tye Poling, Camryn Vilar and his fiancé Natalie Walt, Mitchell Kennedy and his wife Megan Kennedy, Dylan Howell and wife Jasmine Howell, Hunter Johnson, Destiny Howell, Skyla Riley, Orlando Riley, and Aidric Riley. She was also a Great Noni of four great grandchildren, Dean Kennedy, Alana Howell, Aria Shaffer and Derek Howell. She also cared so deeply and prayed for all her cousins, nieces, nephews, and friends.

From the bottom of our hearts:

“I hope you’re dancing in the sky;
I hope you’re singing in the
Angels choir. I hope the Angels
know what they have. I bet it’s
even more beautiful up in heaven
since you arrived.”

In keeping with her wishes, Mrs. Riley was cremated. A memorial service will be scheduled at a later date.