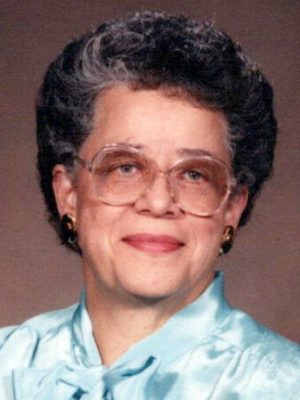 Mary requested that her passing be marked by her family in a private service in the chapel at Floral Hills Memorial Gardens, with no public viewing.

She was born at home on August 5, 1929, in Chesterfield County, Virginia. Mary was the third and youngest child of Dr. Luther Hilton Foster, Sr. and Daisy Octavia Poole Foster, and was raised on the campus of Virginia State College (now University).

After earning a bachelor’s degree from Virginia State and a master’s degree in library science from Simmons College (now University) in Boston, Massachusetts, Mary worked in the New York City Public Library system.

She married the late Dr. Harry T. Burleigh II in December 1950 and worked setting up the first nursing library at Tuskegee Institute (now University) in Tuskegee, Alabama while her husband earned his degree in veterinary medicine.

After he graduated, they settled in Clarksburg, where they raised three children and her husband practiced for over 40 years. Mary was always open to new opportunities. She was active in the community as her children grew, serving as a PTA officer, Girl Scout leader, Den Mother, band booster, and in other roles as they presented themselves. She continued to work with the Liberty High School Band, helping to fit and maintain uniforms for several years after her youngest child had graduated. She was also a regular volunteer at the Clarksburg YWCA.

Mary used her many talents and gifts to acquire a wide range of skills from finishing drywall and gardening to intricate needlework, depending on what the situation called for or what caught her interest. She also enjoyed jigsaw puzzles, crossword puzzles and was a voracious reader.

Her favorite outings in her later years included seeing her friends at the Bridgeport Kroger, and her weekly sessions at Affiliated Physical Therapy – even though she complained mightily about them.
Unable to vote while living in the Deep South in the 1950s, Mary registered after moving to West Virginia and cast her very first ballot in the 1960 presidential primary. She did not miss voting in a major election for the next 60 years, using mail-in ballots to continue voting right up through the 2020 presidential election.

Mary is survived by her children: Anne Burleigh of Lost Creek; Marie Burleigh of Clarksburg; and Harry T. Burleigh III and his wife, Nina, of King George, Virginia; as well as a close niece, Laura Hendrick Charity of El Paso, Texas and several great and great, great nieces and nephews.

In addition to her husband of 48 years, she was preceded in death by her brother, Dr. Luther H. Foster; and her sister, Virginia Foster Hendrick.

Mary requested that her passing be marked by her family in a private service in the chapel at Floral Hills Memorial Gardens, with no public viewing.

In lieu of flowers, the family suggests donations to UHC Hospice or a hospice of your choice, animal welfare organizations, literacy organizations, or another charitable group that is close to your heart.