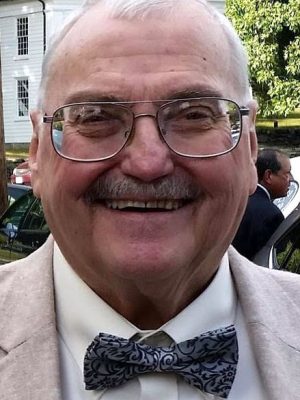 A Mass of Christian Burial will be celebrated on Saturday, January 23, 2021 at 11:00 am at Our Lady of Perpetual Help Catholic Church with Father Kumar Reddimasu as Celebrant.  Interment will be in the Holy Cross Cemetery where full military graveside rites will be accorded.

Michael James Labdik, 76, of Clarksburg passed away on Tuesday, January 19, 2021 at his residence following an extended illness.

He was born in Clarksburg on November 13, 1944, a son of the late Andrew and Helen Kulina Labdik.

He is survived by his wife of 48 years, Judith A. Donnellon Labdik, whom he married on August 17, 1972. Also survived are one son, Andrew Labdik of Clarksburg; three daughters, Elizabeth Lucas and her husband Michael of Pittsburgh, PA, Suzanne Linville and her husband Charles of Columbus, OH and Michelle Ricard and her husband Gary of Delaware, OH; six grandchildren, Grant Linville, Cole Linville, Karolina Lucas, Michaela Lucas, Olivia Ricard, and Landon Ricard; one sister, Marie Kovach of Clarksburg; two sisters-in-law, Donna Lambert and her husband Leonard and Jacqueline Costello and her husband Thomas; and several nieces, nephews, and cousins.

Mike was a 1962 graduate of Notre Dame High School and a United States Army Veteran having served during the Vietnam Era. Mike entered his employment with Bridgestone Firestone, Inc. as an assistant manager and was promoted to manager in 1972. He remained with Bridgestone Firestone, Inc. until his retirement in 2003. During his employment, Mike received many accolades, most notably Managing Partner and the Lifetime Achievement Award for the Northeast Zone in 2004.

As an active member of Our Lady of Perpetual Help Roman Catholic Parish, Mike served as an Extraordinary Minister of Communion, Lector, and Parish Council Member. Mike grew up as a member of the Holy Rosary Parish.

Mike was very active in several religious and civic organizations, including the Serra Club in which he served as president, and with the Knights of Columbus and was a former member and past president of the Clarksburg Kiwanis Club. Mike was also a member of the Clarksburg Lodge No. 482 B.P.O. Elks for 44 years where he served as past Exalted Ruler, past WV State Chaplain and as the District Deputy of Grand Exalted Ruler for the Central District of WV, which was the national office. During his service with the Elks and Kiwanis, Mike was committed to and instrumental in the expansion of women membership. His efforts succeeded with empowering women to enter into full membership with both organizations. Mike was also a current member of Mannington B.P.O. Elks Lodge No. 388.

Mike was an avid sport fan and loved his Mountaineers. Since childhood, he rarely missed watching a Mountaineer football or basketball game. He was a season football ticket holder and for many years enjoyed attending those games with family and friends. Mike was a member and donor of the Mountaineer Athletic Club.

Family and friends may call at the Amos Carvelli Funeral Home, 201 Edison Street, Nutter Fort on Friday from 4:00 to 8:00 pm, where a prayer service will be held at 7:30pm to conclude the visitation. A Mass of Christian Burial will be celebrated on Saturday, January 23, 2021 at 11:00 am at Our Lady of Perpetual Help Catholic Church with Father Kumar Reddimasu as Celebrant. Interment will be in the Holy Cross Cemetery where full military graveside rites will be accorded.

In lieu of flowers, the family requests that memorial contributions be made in Mike’s honor to Daily Living with Father Chapin, P. O. Box 339, Nitro, WV 25143; Our Lady of Perpetual Help Catholic Church Building Fund, 8092 3rd Street, Stonewood, WV 26301; or to a charity of your choice.