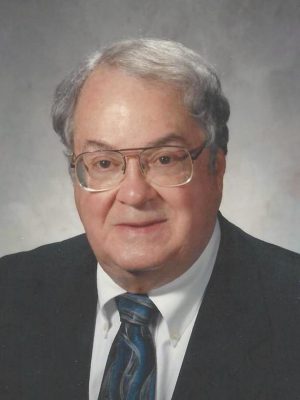 Visitation will be open to the public on Sunday, March 28 at All Saints Catholic Church in Bridgeport from 3:00 p.m. to 7:00 p.m., at which time there will be a prayer vigil, and on Monday, March 29 from 9:00 a.m. to 11:00 a.m., at which time there will be a Mass of Christian Burial with Father Patsy Iaquinta as celebrant. The family requests all visitors please wear a mask and maintain social distancing throughout the church. We appreciate all who attend and help celebrate our father’s life, and help keep one another safe. In lieu of flowers, donations may be made to The Shepherd’s Corner, 101 Pennsylvania Avenue, Bridgeport, WV 26330.

Carmine J. Cann died on March 24, 2021, after a brief illness. He was born in Clarksburg, West Virginia, at St. Mary’s Hospital on July 27, 1930, the second of five children born to James Cann, an attorney, and Antoinette Oliverio Cann.

He graduated from West Virginia University Law School and was admitted to practice law in 1954.

He married Florence Chico of Morgantown, West Virginia in 1952. Florence died too young and suddenly on April 9, 2000.

Carmine and Florence had and raised seven (7) children: James V. Cann, an attorney, and his wife, Sally, of Bridgeport; Samuel J. Cann, a retired oil and gas executive and former member of the West Virginia House of Delegates and Senator from Harrison County, and his wife, Phyllis, of Bridgeport; Antoinette Cann Bonasso, a nurse, and her husband, Louis, of Dublin, Ohio; Judith Cann Maunz, a dental hygienist, and her husband, Brad, of Columbia, Maryland; Claudia Cann Schmidt, a school teacher, and her husband, Paul, of Findlay, Ohio; Carmine J. Cann, Jr., an oil and gas abstractor and title specialist of Bridgeport; Hilarion V. Cann, a Certified Public Accountant, and his wife, Joy, of Clarksburg. All graduates of Notre Dame High School and West Virginia University.

Upon graduation from law school, Carmine practiced law with his father, as Cann & Cann, in Clarksburg in the Prunty Building.

In 1986, Messrs. Cann joined with Lloyd Young and Roger Morgan and practiced in the Schroath Building as Young, Morgan & Cann. Carmine and Roger were later joined in practice by their sons, James Cann and Gregory Morgan.

Mr. Cann was honored by the West Virginia State Bar for his fifty (50) years in the practice of law in 2004. He and his son James joined the firm of Flaherty Sensabaugh Bonasso in the Clarksburg office in November 2017.

Mr. Cann was elected and served in the West Virginia House of Delegates for Harrison County, from 1960 to 1968. During his time in the House and subsequently as a governmental relations consultant for 25 years serving the West Virginia Coal Association and West Virginia Beer and Wine Wholesalers Association, Carmine was widely known, recognized and sought out for his intellect, abilities, influence and political acumen. He was dubbed “Mighty Mouse” in a noted feature article in the Charleston Gazette for his accomplishments in and behind the scenes of government.

An excerpt from the Congressional Record of the United States Senate read and entered by Senator Joe Manchin on July 14, 2020 in honor of Carmine’s 90th birthday reads as follows: “Carmine will tell you that much of his success is rooted in faith and he is forever thankful for the blessings that his Lord and Savior, Jesus Christ, has provided. He is never one to accept acclaim very well, instead to defer all praise and thanks to the Almighty. He is a shining beacon of his faith, family, community and state.

“Carmine’s expertise has been sought after by Senators, Congressmen, Governors, budding community leaders, and his friends and family. He has never been one to shy away from a friendly debate with those who have opposing views. Carmine has the greatest respect for all opinions and people from all walks of life. He is first and foremost an outstanding person, a gentleman in the old sense, and a true broker of compromise in a world so in need of that leadership and trust.”

Besides his wife and parents, Carmine was preceded in death by a sister, Phyllis Hereford, and a brother, Reverend Father Hilarion V. Cann. He is also survived by two sisters, Lucy Eates and her husband, Tony, of Fairmont, West Virginia and Regina Geso and her husband, Sam, of the Villages in Florida, and Naomi Powell, his legal secretary for over 64 years.

Funeral arrangements are being handled by Amos Carvelli Funeral Home.

The family requests all visitors please wear a mask and maintain social distancing throughout the church. We appreciate all who attend and help celebrate our father’s life, and help keep one another safe.

In lieu of flowers, donations may be made to The Shepherd’s Corner, 101 Pennsylvania Avenue, Bridgeport, WV 26330.