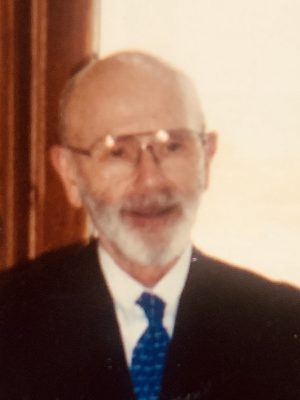 Due to Covid-19, the family has decided to his postpone his memorial service to a later date.

Herb was born on December 19, 1929, in Steubenville, Ohio, the son of Sanford Underwood and Verda Patterson Underwood, and raised in Wellsburg. He graduated from Wellsburg High School in 1947. He attended West Virginia University where he obtained a B.A. in chemistry in 1951. During his undergraduate years, he was a member of Beta Theta Pi, Sphinx and Mountain. He served in the United States Airforce from 1951 to 1953, when he was honorably discharged from active duty. He remained in the Airforce Reserves until 1959. He was admitted to West Virginia College of Law in 1954, where he was a member of Order of the Coif and associate editor of the Law Review.

Upon receiving his L.L.B. in 1957, he joined the Clarksburg office of Steptoe & Johnson, where he practiced for 40 years. He served on the firm’s executive committee for many years, chairing it from the late 1970s to the late 1980s.

Herb specialized in medical and hospital litigation, business and contract issues, including anti-trust and First Amendment litigation; and natural resources litigation including coal and gas. With trials, both jury and non-jury, in West Virginia, Ohio and Pennsylvania, as well as appellate briefing and argument, he tried over four hundred cases and argued over one hundred appeals in the West Virginia Supreme Court and the United States Courts of Appeals. The scope of his practice in West Virginia is illustrated by his trial and argument of Harless I and Harless II, Hill v. Joseph T. Ryerson & Son, United Hospital Center v. Mahmoodian and Dixon v. Ogden Newspapers. He was a Fellow of the American Bar Association, Fellow of the American College of Trial Lawyers, a permanent member of the Fourth Circuit Judicial Conference, an Advocate of the American Board of Trial Advocates and was identified in the “Best Lawyers in America” since its inception. As one of his former partners recently wrote, “Herb was the consummate ‘lawyer’s-lawyer’ – the lawyer you would want to represent you if your future was at stake, if it was a bet your company case.”

In 1970 when St. Mary’s Hospital and Union Protestant Hospital decided to merge, Herb was elected Chairman of the Board of the newly formed United Hospital Center Corporation. His energetic leadership was contagious and inspired a commitment and action by the Board of Directors, the Medical Staff and the Executive Team that resulted in a successful consummation of a difficult merger and, ultimately, to the construction of a new medical center that opened in 1976. He served three consecutive terms as Chairman. Sister Mary Ruth Owen, a charter member of the UHC Board of Directors, observed, “His efforts have been overshadowed by the excitement of success … and his genius may never be fully recognized.”

He was active in the establishment of the Susan Dew Hoff Memorial Clinic, which was created “to render to those in need, with emphasis on females of any age, the working poor, their dependents and the elderly in and about West Milford, Harrison County, West Virginia.”

He was a fitness fanatic. An avid exerciser well into his late eighties, Herb was an active supporter of the Harrison County YMCA, serving on the Board of Directors from 2004 to 2011 and again in 2014.
He was a devoted Catholic and a member of All Saints Church in Bridgeport.

Anybody who knew Herb knew he was an animal lover. He was a long-time supporter of the Harrison County Humane Society to which donations may be made in his memory.

Due to Covid-19, the family has decided to his postpone his memorial service to a later date.