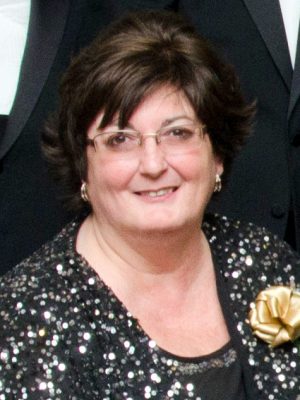 There will be a gathering of family and friends on Saturday, January 2, 2021 at Amos Carvelli Funeral Home, 201 Edison Street, Nutter Fort from 12:00 pm to 4:00 pm, where a prayer service will be held at 3:30 pm to conclude the visitation. In keeping with her wishes, Kathy will be cremated following the visitation.  Due to Covid restrictions, a Memorial Mass will be Celebrated at a later date.

Kathy was educated in the parochial schools in Clarksburg and graduated in 1974 from Mount de Chantel Visitation Academy in Wheeling and went on to graduate from West Virginia University.  She was an avid supporter of WVU for the rest of her life.

Catholic by faith, she was a member of Immaculate Conception Church in Clarksburg.  She had served as a catechism teacher for a number of years.

Kathy had been involved with the family businesses from an early age.  She worked with her parents and brothers in developing North Central Distributors into a statewide wholesaler of beer and wine products.  She helped to change the state wine laws in 1980 and possessed the first wine distribution license in West Virginia.  Kathy was the general manager of NCD and upon her father’s retirement she became the president.  She was well known within the beverage industry for her vast knowledge and was a member of many professional organizations.

Kathy enjoyed promoting the cultural arts in our community.  She was a philanthropist in that she gave not only monetarily, but in her administrative time to organizations within which she believed.  She served in an official capacity with the YWCA, Woman’s Club of Clarksburg, Catholic Daughters, Scottish Heritage Festival and, especially the WV Choral Arts.  It was with the Choral Arts she instigated the community’s Annual Service of Lessons & Carols for fifteen years.

Politically astute, Kathy worked on several gubernatorial campaigns and had served on Governor Justice’s transition team.  She was a Clarksburg City Council member for several terms and served as Vice Mayor.  She served on the WV Women’s Commission for Governor Rockefeller in the

1980s.  Kathy also co-hosted a local talk radio show for several years.  She was selected as a Women of Influence by the NCWV Life magazine in 2015.

“Well read” is an understatement when describing Kathy.  She was a voracious reader and never without a book.  When she was young, she was caught several times reading a paperback during mass.  Family and friends never worried about being late for a meeting with Kathy because she always had a trusted novel with her to bide her time.

Kathy believed in people and in second chances.  And in thirds.  And fourths.  She had an ear for you even when she was buried under a mountain of work.  She did whatever she could to help with your needs or dreams.  All she ever asked was for a level playing field.  Her personal motto was “Non sum qualis eram”

Kathy truly enjoyed the time she could spend with her family, particularly her granddaughters.  She deliberately quarantined herself and avoided activities prior to Thanksgiving on so that she could spend the week prior to Christmas with them.  Her staff and others said how happy she was following the holiday.

Memorial contributions can be made to the newly established Clarksburg-Harrison Public Library Foundation at 404 West Pike Street, Clarksburg, WV  26301.

There will be a gathering of family and friends on Saturday, January 2, 2021 at Amos Carvelli Funeral Home, 201 Edison Street, Nutter Fort from 12:00 pm to 4:00 pm, where a prayer service will be held at 3:30 pm to conclude the visitation.

In keeping with her wishes, Kathy will be cremated following the visitation.  Due to Covid restrictions, a Memorial Mass will be Celebrated at a later date.