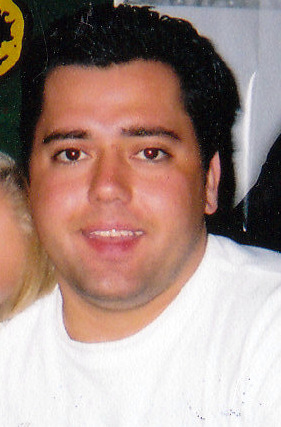 In keeping with his wishes, Mika will be cremated following the service.

Mika Adrian Hunter, 44, of Charlotte, NC, formerly of Clarksburg, was born on April 4, 1974.  After an eight year battle with multiple myeloma, he joined his Mom, Jacquelyn Hunter, on May 21, 2018.

Mika was a 1992 graduate of Notre Dame High School and he received his Bachelor of Science degree in Business Administration in 2007 from Fairmont State University, where he proudly made the Dean’s List.

Mika had many gifts, but his comedic talents put Jim Carrey to shame. Who else could make a Goodfellas comedy routine out of cancer treatments? And no one was safe from Mika’s spot-on impersonations and cornucopia of strange sounds. Only a lucky few got to meet The Troll.

Mika is up there singing like Jim Morrison and riffing with members of Pink Floyd, Chris Cornell, Prince (using Mika’s version of “Acid Rain,” instead), and all the other greats.
The fantasy sports world will never be the same without his unprecedented sports knowledge. Right now Mika is on the 50-yard line of Soldier Field with his idols Walter Payton and Brian Piccolo getting the call from Coach Halas to catch a halfback pass from Walter Payton because Hunter had great hands and he would have caught it. Touchdown. Kid loves it.

He was not mechanically inclined, and this was one of the very rare areas where angry Mika would come out. Mika left a trail of black smoke from Philly to Lansdale trying to put oil in his car. The madder he got, the harder we laughed. He did however figure out how to change his spark plugs via YouTube University. Mika also became an avid photographer after basically being forced by Lizzy to shoot her blog photos. Over the course of a few shoots, Mika’s eye for perfect lighting and backdrops are what really made her photos stand out (though she will always credit her perfect taste in heels).

It’s impossible to do justice to a tenth of his wonderful qualities in this short space, but he gave his family and friends so much love and he was so very loved in return. His attitude was nothing short of incredible. Mika’s words upon receiving his diagnosis were that he was lucky – lucky that he wasn’t being told he had six months to live. We all have to channel that kind of strength and positivity he showed us in every area of his life to get through this and give him the send off that Lord Vader/Zod demands!

It is Mika’s and the family’s strong wishes that, in lieu of flowers, donations be made towards cancer research with the MMRF (we’re so very close to making multiple myeloma chronic instead of terminal!) and to the hospitals who took such excellent care of Mika.

Too Mika.  Nahahat on yours .

In keeping with his request., Mika will be cremated following the service.