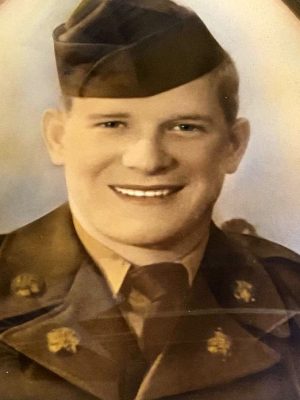 Roy E. Mooney Sr. was a Veteran of the United States Army, serving during WWII. During his service he had the pleasure of having Tea and Coffee with Dwight David and Mamie Eisenhower, who at the time was Supreme Commander of the Allied Expeditionary Force and 5 Star General prior to becoming 34th President of the United States of America.

Roy E. Mooney Sr. started working for Huffman Construction in 1972 and remained a devoted employee till his death. Through his career he worked on and supervised numerous projects including Extreme Home Make Over West Virginia Edition with Ty Pennington in Fairmont Wv. Over the years The Huffman Family had become more than his employers and co-workers, they were his friends and family. He enjoyed every minute of his career working along side them and prided himself on his accomplishments.

Roy E. Mooney Sr. lived a long, beautiful life full of love, laughs and friendship. Over the years he had numerous friends, but the long-lasting friendships he had with Danny and Karen Drain for 25 years and Charla Pumphrey were the highlight of his life. They were his best friends and confidants through the good and the bad and he loved them all dearly.

The family would also like to thank all the staff at Amedisys Hospice for the kindness and compassion they showed Roy E. Mooney Sr. and his Daughter Tracy Mooney. Angels really do walk among us, veiled as Nurses.